I am thankful to the members of Gandhi Peace Mission 2015 for inviting me to attend the inaugural session of International Peace Summit at Beliaghata, Kolkata, a place which symbolizes inter-community harmony and coherence. 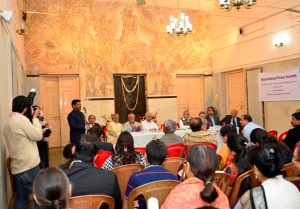 To stand and speak in this historical Gandhi Bhawan, where Gandhiji lived during his visits to Kolkata and where he fasted for 25 days from August 13, 1947, during the partition riots, means a lot for me. Thank you once again.

Hope you will agree with me that whenever we talk about Gandhiji, we project non-violence as a weapon against violence. But we forget that if non-violence is a weapon, then it shall not be with individuals, not with common men. Weapons are the tools of violence, all decent men detest them. As a weapon shall be with the government, with the law enforcing agencies only; this is exactly what happened – for us it has become the task of the government, of the law enforcing agencies to ensure non- violence, peace, equality and brotherhood in the society without the contribution of the society at all.

Standing here today, I wish to ponder over Gandhi Ji’s role and his philosophy of non-violence in bringing peace in the riot-affected Kolkata of August 1947. Once the struggle for independence was over, and the nation was preparing to celebrate its first Independence Day, instead of participating in celebrations, Gandhiji went to Kolkata on a new mission – a mission against communalism, a mission against violence, a mission against hatred. Gandhiji’s Kolkata mission and his fast were not meant to activate the government or the law-enforcing agencies, but to convey the message that non-violence, peace, harmony and brotherhood are our Dharma. As Buddha said ‘अहिंसा परमो धर्मः’, the same thing Gandhiji said again and again to all those who were killing fellow Indians in the name of Dharma itself. He knew that what no army could do, the feeling of dharma could. And the miracle happened. The city of hatred became the city of joy. This miracle of Kolkata needs to be propagated, the word “non-violence” needs to be redefined from the perspective of Dharma rather than a weapon. Then only we shall be able to achieve our goal of universal peace and brotherhood.

One more thing I will like to emphasise upon from this platform; we need to understand that no growth is possible in isolation. For growth, for development different factors are required to be there. The government has to realize and understand it. The policies shall be such as will promote interdependence in society. When a seed is put in the ground, and earth and water and air are placed around it, does the seed become the earth, or the air or water? No, it becomes the plant, it develops after the law of its own growth, assimilates the air, the earth, and the water, converts them into its own life-material and grows into a plant. Similar is the case with religion. A Hindu is not to become a Muslim, or a Christen, nor a Muslim or Christen has to become a Hindu to live peacefully in today’s world. But each one must assimilate the spirit of the other and yet preserve his individuality and grow according to his own law of growth. Then only peace will prevail in our world.

The Kolkata period of Gandhiji was his best period as a Satyagrahi when at 77 he without any purvagrah (prejudice) was on a mission of peace and love. I personally feel that here in Kolkata, Gandhiji was acting greater than Bhishma Pitamah of Mahabharata. Bhishma was keen to follow his dharma only, but Gandhiji was not only fulfilling his dharma by fasting, by praying but with those actions of his was morally forcing others to follow the dharma. This face of Gandhiji has been neglected by history. Maybe we never wanted to tell the world that Gandhiji was not happy with the blood-soaked partition, and he refused even to participate in the ‘celebrations’. This act of courage, where insistence with love, faith and trust brought peace, needs to be shared with our children.

The time has come when we need to ensure that Gandhiji is not deified to be worshipped as a deity in an alcove but that he was always a teacher, with enormous moral compulsion, and we and our children know him as a teacher of immense persuasion. I wish to request all my friend here to take this magic of Gandhiji to schools, colleges and universities using modern technology. Having Gandhi Centers alone will not serve the purpose, we need to take Gandhiji to the masses again. I believe that this summit will ignite a new spark in the nation, especially in the young generation to understand the meaning of peace and brotherhood, and to rediscover the real Gandhi. I am thankful to Dr Sankar Sanyal and Prof Radhakrishnan and all of you for your sincere efforts that Gandhiji remains alive where it matters most—in our heart and mind, and inaction of love and peace. May this mission be a success, may we shine in unity, and may we live in peace and remain in harmony with each other always!

Kunwar Shekhar Vijendra belongs to a small historical town Gangoh, situated on the banks of river Yamuna in district Saharanpur of India. He is the Co-founder and Chancellor of Shobhit University India and a prominent social entrepreneur based in New Delhi, who carries leadership roles in many organizations. He is Co-Chairman, National Council on Education of ASSOCHAM- the oldest Apex Chamber of Commerce & Industries of India. He is also the National President, Centre for Education Growth and Research (CEGR) - the largest Independent Academic Think-tank of India. Kunwar Vijendra is a persistent advocate of the initiatives for education for all, secular values, crisis management through diplomatic and peaceful ways, and globalized systems of learning and peaceful co-existence. He had been instrumental in the development of a number of higher education institutes, research centers, and a hospital in north India. He is very actively involved with a number of social organizations also. Acknowledging his contribution to society in the areas of education and other concerns he has been copiously honored and awarded. He has traveled widely in India and to the countries like USA, UK, Germany, Australia, Russia, China, South Korea, Vietnam, Mongolia, UAE, Mauritius, Rwanda, Uganda, Croatia etc. to participate in various professional, social and educational activities. He is a Passionate Gandhian, Philanthropist, Social Speaker & Academic Influencer. View more posts

One thought on “Time to rediscover Gandhi and to redefine Non-Violence.”